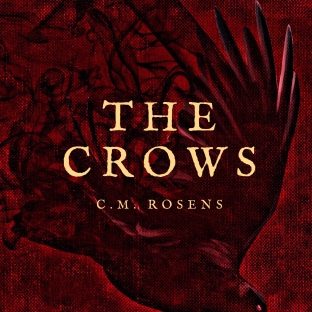 I’ve had some awesome fan art from ‘trie, a concept artist who discovered The Crows via the Romancing the Gothic book club. I’ve shared it on my Twitter and Insta but sharing here as well with the original illustration by Tom Brown, the artist who illustrated the eBook and paperback versions of the novel.

Ricky Porter was a very popular antivillain character among book club folks and featured in the Saturday lecture “BE GAY, DO CRIMES: QUEER GOTHIC REIMAGININGS” by Dr Sam Hirst, who organises and facilitates the Romancing the Gothic network and events [for free]. Support Sam here: https://ko-fi.com/samhirst

Sadly, the recordings of this lecture weren’t useable for uploading to the YouTube Channel, so GOOD NEWS! The lecture is going to be repeated, probably in August. So if you missed it or just want to hear it again, you can sign up to get RtG newsletters and info on the site (www.romancingthegothic.wordpress.com).

Ricky and his role in The Crows features with minor spoilers in Part 4 of the lecture which considered asexual/aromantic representation in Gothic fiction.

Dr Hirst discussed the relationship between the main characters [Carrie, Ricky and Fairwood House itself] in terms of a queerplatonic polycule, and how decoupling a sexual motive for murder from Ricky’s serial killer identity centred the complexities of his character and the development of the platonic/queerplatonic relationship within the plot!

If you’re intrigued, you can meet Carrie, Ricky and Fairwood House (also known as The Crows) in this extract of the novel: the first 5 chapters are available for free on Wattpad, and there’s a shorter snippet post introducing Ricky here on my blog. You can meet Carrie in this fun short (non-canonical?) post, set before the events of the novel, and get to know the house in this one.

If you want to know more about the topic in general, stay tuned! I’ll let you know when the date for the lecture’s repeat is announced and also post the link when the recording goes up at a later date.

Here’s Ricky as imagined by Tom Brown the illustrator (top), and as reimagined by ‘trie (bottom)!