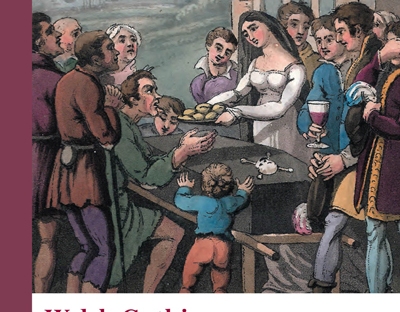 In the previous post we looked at texts featured in Chapter 1 of Jane Aaron’s Welsh Gothic, and very briefly at the postcolonial framing of some of these narratives. This post looks at the ghost stories and dark tales that were associated with different parts of Wales, used as inspiration for the Gothic tales of the 1780s-1820s, and which were so alluring to early tourists. The previous post was not exhaustive, and you can buy the book to read the complete chapter: https://www.uwp.co.uk/book/welsh-gothic-ebook-pdf/

Some of these ghost stories and folkloric tales are briefly listed in one paragraph of Welsh Gothic Chapter 1, others are additional and attested prior to 1780. You might also want to pick up a copy of Mark Rees’s Ghosts of Wales: Accounts from Victorian Archives (2017), and/or Richard Holland’s Haunted Wales: A Guide to Welsh Ghostlore (2011). If ghost walks and tours are your thing, then there are plenty of these to choose from across the country, and Haunted Wales has a handy list by location. Happy reading, spooky people!

Southerndown, Glamorgan, once a notorious ‘wrecking village’, was/is home to the Blue Lady of Dunraven and the ghost of the insatiable ‘wrecker lord’, Thomas Wyndham, who appears at midnight on the anniversary of his death. Not much is known of the Blue Lady, but Thomas Wyndham’s tale is a variant of one told up and down Wales where such practices took place.

‘Wrecking’, or luring ships onto rocks on purpose in order to plunder their cargo, was lucrative. Survivors were killed so they couldn’t report back to the authorities, or identify any of the men who set lights for the ships and plundered them. Wyndham was miserly and obsessed with amassing treasure, although he was also devoted to his only surviving son and heir, who (of course) went to sea. You can guess where this is going… and indeed, of course, it goes there in style. Gothic style.

After some time, a rich galleon appears, probably on a dark and stormy night. Wyndham orders it to be wrecked, the survivors are killed, and among them is… obviously… his beloved son. Wyndham (naturally) goes mad, hence his becoming an unhappy ghost. Some sources claim Wyndham’s ghost can be heard screaming and wailing along the beach on the anniversary of his death.

This tale is also told of the unlucky Vaughan family who also lived in Dunraven Castle at one time, except in this version the lord got a nasty gang to do his wrecking, led by Mat of the Iron Hand. Mat brings back the severed hand of Vaughan’s son, still wearing his identifying signet ring, to Vaughan as a ‘special gift’. It is also told of an unnamed old couple, who have a much-loved sea-faring only son that the father discovers half dead in the shallows after wrecking the boat he happens to be on, and, not recognising him in the dark, the father takes a rock and bashes his beloved son’s head in.

It is interesting that both the Wyndhams and the Vaughans had this tale told about them, and both families lived in the same place. It would appear that this is a formulaic cautionary tale that can be applied to either of these lords of Dunraven, and one that perhaps had political overtones, considering their status and political offices.

Not mentioned in Aaron’s brief notes but also in Glamorgan, not far from Southerndown, the White Lady, a twelfth-century spectre falsely accused of adultery and starved to death by her husband, haunts the ruins of Ogmore Castle. (When he realized she was innocent, he, of course, also went mad).

The Stradling family of St Donat’s Castle, Llantwit Major, also had their share of family spectres, including, apparently, a ghostly panther. The (murdered?) Lady Anne Stradling, whose husband died on Crusade, was a death omen for the family akin to the Irish banshee (for the Welsh, this spectre was the cyhyraeth, sometimes conflated with the Gwrach-y-rhibyn), and appeared with a pack of cŵn Annwn, the hunting dogs of the Underworld.

Also connected with the Stradlings is the witch, Mallt-y-nos (Matilda of the night). She is meant to be the ‘witch’ or ‘crone’ apparition that has been seen in the castle’s armoury, an apt place for her considering her hunting obsession, but there is a lot of folklore about Mallt-y-nos which predates her Norman origin story.

Welsh Witches of the North and South

I’ll be doing a separate series of posts on Witches, Druids, Hellhounds and Sin-Eaters, the four main figures that populate Welsh Gothic, set out in Part II of Aaron’s book. Here, however, are a few select tales of witchcraft.

Matilda-of-the-Night, whether Norman noblewoman or Hag of the Wild Hunt, was not the only witch around. Brandy Cove, another smuggling hotspot this time on the Gower Peninsula, is reputedly haunted by the ghost of ‘Old Moll‘.

Old Moll made a home for herself in one of the caves at Brandy Cove, and was reputedly both a witch and cursed. Wherever she went, bad luck followed. Children were beset with night terrors, animals went lame, crops failed. A vigilante group melted down silver coins and turned them into bullets, but they failed to kill her – she escaped, but was shot in the leg. Old Moll left the Gower and went further inland, spreading her curse wherever she went.

In a similar tale of warning about letting (cursed) strangers into your tight-knit community, but this time with strong anti-Irish and anti-Catholic overtones, is the tale of a ‘tribe’ of witches (both men and women) of Llanddona, Anglesey. The Tales of the Llanddona Witches are not some of Wales’ best-known, but there are two potential origins for it. First, if it’s a post-Civil War-era tale (1640s) then this accounts for the boatload of supernaturally gifted (Catholic) Irish turning up in a boat and causing trouble for the locals – the Cromwellian conquest of Ireland was bloody and genocidal, demonizing the population. Second, if it’s post-1736 when the repeal of the Witch Laws meant people took things into their own hands, usually by putting “witches” in an open boat without oars, food or water and setting them off out to sea, this could also account for the particulars of this fable.

You can find some versions and re-tellings online, here (Angelfire); here (myths & legends of Wales), and here (Llanddona Village Hall).

If ever there was a country made for Gothic fiction, Wales is probably it. Check out some Landscape Photography if you don’t believe me. Anything can happen in a place like this…

The Ghosts and Legends of Wales – Haunted Wales

Not mentioned by Aaron but one of the most [in]famous haunted buildings in Wales is the Skirrid Mountain Inn, Crucorney, which claims to be a 900-year-old inn that during the Middle Ages was both courtroom and place of execution (by hanging the convicted from the rafters). There is no evidence for this, but local legend has it that 180 criminals were hanged here and that you can see the rope marks on the wood. It is apparently first mentioned in this context, with the hanging of a man in 1110, but it’s unclear whether there was actually an inn on this exact site at this time. It is also associated with Owain Glyndwr’s fifteenth-century rebellion against Henry IV, but this is a later story. The inn itself is a mid-seventeenth-century building, Grade II Listed.

C. M. Rosens is an author of fantasy, historical fiction, mystery/crime and urban paranormal. She hopes you enjoy being inside her head as much as she does. View all posts by cmrosens

This is where Pagham-on-Sea is not!! #nofilter on these so you get the full misty impression of this January wander along the coast... farms one side, sea on the other. Imagine a spur of chalk giving you cliffs and a full town of about 20k people where the fields are. Reference video to follow! #writinginspiration #PaghamOnSea #Paghamverse #TheCrows #referencephotos #amwritingfiction #amwriting
Details from the mezzanine bed area of our Morocco room @ Zanzibar Hotel!
In the Morocco room for my birthday weekend @ Zanzibar Hotel, St Leonard’s... we will go to Norman’s Bay tomorrow where Pagham-on-Sea is conspicuous by its fictional existence so just imagine that it’s there
From Gothic Paranormal to time travel pirate romance, I’ve got a busy #reading schedule this year... my goal is a modest 1 book a month so I hope I will smash that! What are you reading? #indieauthors #promotehorror #readersofinsta #readersofig #readersofinstagram #bookstagram #books #bookstoread #kindle #goodreadschallenge #goodreads #readingcommunity #bookstagrammer #fiction #nonfictionbooks @marionblackwood @katcaulberg @nitapanwrites @ari_meghlen
Forgot how much i loved this film..... so bought the dvd!! Horror writer R Chetwynd-Hayes (Carradine) is attacked by starving vampire Erasmus (Price) and to thank him for his ‘donation’, Erasmus takes the author to his club where Chetwynd-Hayes meets more monsters and listens to three tales of terror. A really fun anthology that won the Audience Award at the 1981 Fantafestival, Rome. #horrormovies #classichorror #classichorrormovies #horrorfilms #vincentprice #favouritefilm
Thank you @davidjthirteen for this!! The illustrations do look lovely in the flesh...... . . #bookstagram #bookstoread #books #booklovers #reading #readersofinstagram #readersofinsta #readersofig #newbooks #newbookalert #newbookstagram #review #bookworm
%d bloggers like this: