In the days of the Romans, a hairy-tailed star fell from heaven and struck the ground where the ironworks once stood. Their soothsayers claimed this as a bad omen, and with the star came a pestilence among the Roman camp, a punishment from Almighty God for their treatment of the local inhabitants who had lately turned to Most Holy Christ under the teaching of missionaries from Rome. For their commander (dominus) was a cruel man and by the influence of the devil, an enemy of the new faith [Christianity].

And he had taken the missionaries – St Theophilus, St Ambrosius and St Justus – to be flayed and hanged outside the camp, and from the place where the blood of these three gentle martyrs collected in a pool, a holy spring came forth from the ground between the roots of the tree on which they were hanged, and many infirm were healed who drank from it.

After the fall of the comet, the Roman forge was destroyed, and those who disturbed the place where it fell became as beasts, without reason or the power of speech. Just as the great king Nebuchadnezzar was struck down in the day of Daniel, so too were the Romans struck down. Many of the commander’s men were heard to howl and snarl as if they were wolves or dogs, and they did slaver and foam at the mouth as though possessed. At night they roamed the woods and lonely countryside in the most polluted places, looking for travellers to waylay and to bite at, until their own fellow-soldiers came with swords and others also with swords and spears and some with sticks to make a swift end of them.

The crater wherein it lay became the cradle of the pestilence that did destroy the Roman camp and its most cruel commander, and thus did the mighty hand of our Lord God strike against [their] wickedness.

To this day, the ground whereon the comet fell is unwholesome and is much avoided. People do not travel there, and will not go that way by night. Yet in the daylight some bold and foolish men have strayed to the place and taken some of the stones from that place, and washed these stones in the holy spring of the Three Martyrs, and thus purified them: and the stones so washed are said to have healing and restorative properties.

But the stones that are unwashed and taken away from the spot are to be placed under the beds of [one’s] enemies, for then the stones will effect a curse upon them. 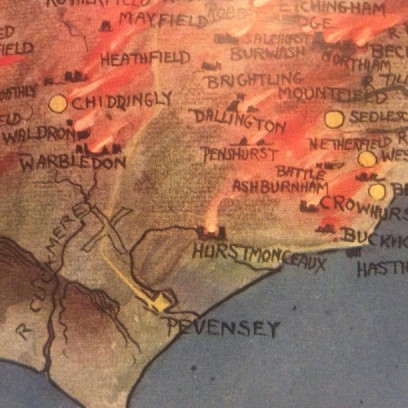 Image and detail: Donald Maxwell, Unknown Sussex: Being a series of unmethodical Explorations of the County illustrated in line and colour by the Author, (London, 1923, repr. 1924), a double page spread that sits between pp. 200-201.

[Obviously, you can’t see the Roman ironworks of Pagham-on-Sea in this map because the meteor fell on it]

8 thoughts on “Folklore of Pagham-on-Sea: The Meteor (Part 1)”

Another fantastic review for #TheCrows, thank you so much Stephanie <3
My bb boy, no thoughts only vibes -- photo credit @ezraarndtwrites
Found the very first placemat set I bought myself in 2008. We thought it might be fun to put them back on the table.
The sequel of my book baby is also up for grabs: read it before book 3 comes out!
My first book baby turned 3 this month so here are 3 great reviews I got this month for #TheCrows!
Did you catch this episode of @harpiesinthetrees yet? It's on her #booktube channel and THE CROWS was Patrons' Pick!
Loading Comments...
%d bloggers like this: