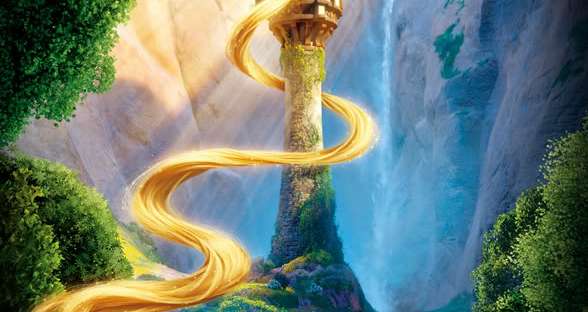 Ah, another classic tale that’s had a lot of interesting adaptations over the years… Hopefully my musings are also helpful for sparking inspiration, and it’s a lot of fun coming up with prompts based on the various elements of the tales.

Some of my favourite versions of this story include The Stone Cage by Nicholas Stuart Grey, and (contentious, I know, don’t judge me) The Brothers Grimm (2005) starring Heath Ledger, Matt Damon, Lena Headey and Monica Bellucci. I also quite liked Tangled (2010).

The full text of Grimm 012: Rapunzel can be found here, hosted by UPitt.

In this tale, the catalyst to the Losing Your [Firstborn] Child deal is the father’s theft of rapunzel (the salad plant, known in English as rampion) to satisfy his wife’s pregnancy cravings. Much like Beauty and the Beast, the father loses his child to the Antagonist for taking something that belongs to said Antagonist. The father usually has the excuse that he is getting something for his wife or child, and the theft is fulfilling an obligation to them. The same is true here. While (a fair few) modern retellings have Belle consciously sacrificing herself on behalf of her father to circumvent the woman-as-property element, it’s not so easy to do that with Rapunzel. She is the innocent stolen baby brought up by an enchantress or witch, who never meets her birth parents. Whether stolen or given away, she didn’t get a say in her imprisonment.

There is always the doorless tower, in which Rapunzel is imprisoned, and the means of escape (and escapism) is her long rope-like hair. Again, in one version, the witch/enchantress only realises the prince has been visiting Rapunzel because he gets her pregnant; in another because she slips up and asks why Dame Gothel is slower at climbing up than the prince is.

The prince fares pretty badly in this story. Rapunzel is banished to a desert where she gives birth to twins, while the prince, tricked into climbing up the tower by Dame Gothel, is thrown down into the thorn bushes which pierce both his eyes, blinding him. Of course, he eventually (after much blind wandering, glossed in a line or two) finds Rapunzel with his kids living in miserable poverty in the wilderness and there is much weeping. The weeping dislodges the thorns or has healing properties and his sight is restored, so that they can return to the kingdom.

(Yes, this story is ableist: it implies that the ideal was for rulers to have no physical defect in order to rule, and that a happy ending is predicated on total physical healing. It doesn’t consider living a full, happy life with a family and power and responsibility as a possibility for a blind man. This might be something to address in the retelling!)

In Judeo-Christian and Islamic parallels, Rapunzel/Rampion could potentially be seen as a Hagar figure in the second half of this tale.

Here’s a fun list of random writing prompts around the Rapunzel tale! If you like these, consider buying me a ko-fi so I can cover WordPress plan costs, or check out my fiction in my Fiction Page.

RAPUNZEL, but the protagonist is a blind hairdresser (like this lady from Kibuli, Uganda) who falls in love with a client and their long braided hair – but there are Obstacles in the path of True Love…

Yup, hairdressing is something an experienced person can do by touch and instinct. Dianah Kendall returned to work after an accident that caused her to lose her sight, and Aisha Bahati, musician and hairdresser, is blind. Seema Flower is also registered blind, and is one of London’s leading hairdressers. She is also the Managing Director of BlindAmbition.

RAPUNZEL, but the tower is a metaphor for the barriers the protagonist puts up, and the only person they ‘let in’ is their adopted mother… until they meet a persistent Love Interest willing to scale their walls and find them in the wilderness…

DYSTOPIAN/HISTORICAL FICTION RAPUNZEL, where the Protagonist has been taken from their birth parents unfairly by the State, and as they grow up to see the injustices in their world, their rebellion against the System/Government begins with their hair style…

(An ‘enchantress‘, the noun used for the Antagonist in some versions of the tale, is by definition alluring and attractive, so this would work well as a metaphor for mainstream ideology).

RAPUNZEL, but the Antagonist steals/buys children for some Nefarious Purpose, keeping them locked up in a doorless tower. Their first test is escaping.

SPEC-FIC RAPUNZEL, but the whole story is simplified into five lines and treated as a prophecy: somewhere, in the desert, a Mother awaits the return of the Blind Man…

Check out my other posts on Sleeping Beauty, Beauty and the Beast, and Snow White!

You can help me make more by buying me a ko-fi, which will help with the cost of my website!

I’m an author too – so you might be interested in my contemporary paranormal novel, The Crows, featuring: