I’ve interrupted the lovely flow of the series to bring you a bit of news: I’ve started a new project called Fairy Tale, which is a children’s fantasy story set in South Wales.

It all starts the day nine year old Cerys sees her grandfather’s ghost. She discovers that he left a book for her – all his research about local fairies – and a strange crystal necklace that seems to have a mind of its own. What Cerys doesn’t realise is that the necklace is actually a very powerful key – and when she wears it on a family picnic up Twmbarlwm mountain, two years later, she accidentally opens a portal to another world… and causes her parents to disappear. With her little brother Tom and Merula, the talking magpie, Cerys sets off into Fairyland on a dangerous mission to rescue her parents and keep the Fairy King from getting his hands on her key.

I’m writing it because a young MC is a bit of a challenge, but I really enjoyed writing BOOK OF TIME because of Yury’s chapters. It was a lot of fun to write about children for a change, and far from having to simplify things, it’s actually pretty important to get it right. When you’re writing about children, you’re laying the foundation for the kind of adult you want them to become – so you’re writing with one eye on a future that your reader will never actually see.

This was one of my favourite scenes to write in BOOK OF TIME – a group of abducted children in the Faerie Queen’s treasure room, trying to escape her evil child-snatching clutches. Yury is a Necromancer who talks to ghosts a lot, Jaime is a dracomancer who misses his pet storm dragon, Emine is a princess, Persephone is a prudish but normal middle-class girl from a pseudo-Victorian steampunk future, Joaquin is a rebel caught up in a war in his home country, and Astrid is the daughter of a forest tribe’s chieftain. I figured that all the faerie glamour in the air would have them all speaking Vaune, faerie language, so that the faeries could understand them. This has the happy side-effect that they can also understand each other, as they come from six different times and six different countries.

They made their way around a pile of ornate chairs and footstools, all moulded together into one large higgledy-piggledy pile by the gold dripping from the ceiling, so that they rose in one solid misshapen lump from the floor like a stalagmite. Astrid began to wonder if this was a hoard at all, or simply a place where treasures grew like plants from seeds. There was a pile of goblets and candlesticks and other bric-a-brac off to her left, and she had to dodge a splashing puddle of molten metal because she was too busy staring at it and trying to work out which had come first, the treasure or the dripping gold which covered it. Was the gold like some kind of cocoon? Was it a treasure store or a treasure mine? Where these things all piled up like this by the Fae, or did they take on these forms all by themselves?
They stuck together, following Jaime, and all in a tight little bunch. Yury realised he was at the back, shoulder to shoulder with Persephone, while Joaquin was the other side of her and a little further forward. Astrid and Emine were in the centre, clinging to each other and to the back of Jaime’s shirt. He threw his power out around them, trying so hard to concentrate on getting the light right that he wasn’t really paying attention to anything else.
“I’m sorry about just now,” Persephone mumbled to Yury, under her breath.
Yury grunted. “That’s alright.”
“It’s the shock, that’s all. I mean… you’re not…”
“…Real?”
Blushing, the girl shrugged. “Well. You’re not.”
“Thanks.” Yury lifted an eyebrow, and the irony glittered for a moment in the midnight depths of his navy eyes. He could almost hear his mother whisper, so like his father. Suddenly, he missed his family fiercely. It welled up inside him all at once, and the need to do his father proud burned as he cast his mind to looking for the Iron Crown in the midst of all the golden piles.
“What are you thanking me for?” Persephone asked, confused.
Yury shook his head. “Sorry… Concentrating.”
Her mouth formed an ‘O’, and she fell silent.
“Look, rubies!” Emine said, pointing up at the very top of one of the piles, where red gems gleamed in the light.
“Look, a door!” Jaime exclaimed more pointedly, and he was right.
“Um. I don’t think those are rubies,” Joaquin said as he looked up, the others directing their attention to the door Jaime had spotted.
“Who cares what they are?” Astrid scoffed, not looking. “Let’s get out of here!”
“No, seriously, they’re not rubies,” Joaquin said, pushing his way between the girls so that they were behind him, and staring up at the top of the pile. “Did you see that?”
“What?” Emine asked, her tone betraying a wary dread.
“I think they moved.”
Jaime thought he saw another flash of red and directed his light at the pile the other side. The beam raked up the towering sides, and he saw the red glint about two thirds of the way up. He swallowed hard. “They’re eyes, aren’t they?”
Yury was getting sick of this place. “Yep.”
Jaime sighed. “We’re all going to die, aren’t we?”
Yury thought twice about saying ‘Definitely’, but it was a fact nonetheless. “Probably,” he said, with a little more tact.
There was a clinking and a rustling from behind them, and they all spun around.
“Yury…” Astrid shrank back against him, and for a moment, Yury forgot that he missed his parents and his home, or that they were about to be eaten by something rather nasty. He wasn’t sure why – she was only a girl.
“What do we think they are?” Jaime wanted to know.
“No idea,” Yury said shortly. “Anyone?”
“Ah…” Persephone wracked her brain. “Ah-h… we’re underground… there’s treasure… um… dragons?”
“Not a chance,” Jaime scoffed. “I’d know.”
“Alright! Well… there’s… um… I don’t know! Gryphons?”
“Too small,” Joaquin muttered.
There was another ominous clink, and as they whirled to see where it had come from, six other rubies glinted out from between the piles behind them. That meant three other pairs of red, faceted eyes.
Yury swallowed hard. “Let’s just… back away…”
Jaime cast his light on the path before them. It was still clear. His heart was pounding. “Run!” He yelled, as his nerve broke. It was either sprint for the door, or wet himself. As they all took off as one, bunched up in their tight group and racing for the exit, they heard the slither of falling gold behind them and the whisper of moving air. Whatever they were, they were after them, and they were gaining.

I really enjoyed this because this was the first time all the children had been together, interacting as a group. I also like putting characters in peril to see what they’ll do… and children are often more resourceful than adults! 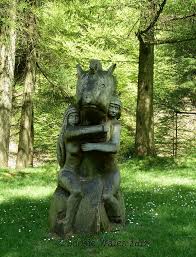 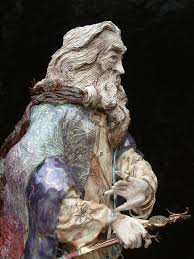 FAIRY TALE is, I suppose, the Welsh version of Spirited Away…

I’m very excited about it, because I know the locations so well, and I’ve always wondered how to inject some magic and glamour into surroundings that I think of as familiar.

The challenge is in making the characters familiar, without falling flat and being mundane.

I think it needs quite a bit of work, so I would value as much feedback as humanly possible, pretty please!! All the locations are real, but I don’t want to bog the story down by getting over-zealous with the descriptions. I also need to do some real work on Cerys’s character, so any pointers you’d like to give me there would be very welcome! 🙂