A great review from Meredith Debonnaire!! 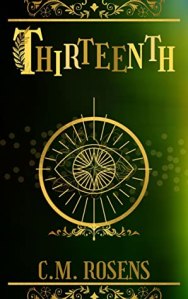 Gran’s house was the oasis of calm Katy Porter craved.

*note: Thirteenth is the sequel to The Crows, so you should read that first. Also this review may have spoilers for The Crows, so be aware.*

C.M. Rosens is in a league of her own, something I say with both love and enthusiasm. In The Crows, she grabbed every gothic horror trope she could find, put them through the blender, and somehow made me hate Carrie’s painfully mundane ex-boyfriend more than the literally-a-murderous-cannibal neighbour. In Thirteenth, she takes the idea of the Chosen One by the horns and then covers it in eldritch tentacles and teenage rage. It was an absolute joy to read.

Our protagonist is Katy Porter (she’s a cousin of Ricky Porter, a main character in The Crows who eats people and tells the future, yet I still want to just wrap him…

It's spooky season, so I'm going to do a few posts on things to read during this time! Off the back of the non-fiction series of murder posts, I'm kicking off with murder at a haunted attraction, and then I've got a guest post to share with a load of recs for body horror books.… END_OF_DOCUMENT_TOKEN_TO_BE_REPLACED

How to Unpeel a Monster How to Unpeel a Monster by Nimue Brown My rating: 5 of 5 stars A brilliant anthology that deeply resonates with me. I just got this and spent yesterday curled up crying with it for a while because some of the poems here really connected and expressed things I have… END_OF_DOCUMENT_TOKEN_TO_BE_REPLACED

Spectred Isle by K.J. Charles My rating: 5 of 5 stars Brilliant I loved this book. We read it for a Gothic lit book club and I loved the world of 1920s London and the lost generation worked so well for this. The depiction of the War and the various experiences of those who survived… END_OF_DOCUMENT_TOKEN_TO_BE_REPLACED

Widdershins by Jordan L. Hawk My rating: 5 of 5 stars I have been looking for some fun Lovecraftian fic for a while, and this hit all the buttons for me. I loved the Gothic elements of the setting and the characters, the reimagining of and/or nods to one of the better Frank Belknap Long… END_OF_DOCUMENT_TOKEN_TO_BE_REPLACED

Are you afraid of the dark? Close your eyes and listen, and perhaps you will overcome your fear.
BIRDS OF A FEATHER - on Ko-Fi only!
BIRDS OF A FEATHER - on Ko-Fi only!
NEW BOOK 📖 OUT NOW
Duet eBook!
A detail orientated photographer meets a mysterious man whose image cannot be remembered in person or when captured on film, and her obsession with him spirals out of control.
C. M. Rosens
Website Powered by WordPress.com.
Loading Comments...
%d bloggers like this: